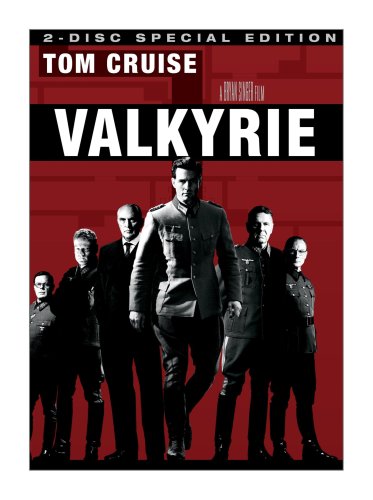 How uncanny that the movie Valkyrie starring Tom Cruise would come out at just this time. Only last week I watched Operation Valkyrie: The Stauffenberg Plot to Kill Hitler. I admit it took me about four days to make it through the entire movie. It was difficult to follow and while I was motivated to watch the documentary some of the footage was old and grainy and being tired, I kept falling asleep.

I really wanted to make sure I didn't miss anything. The movie left me wanting to know more.

"Produced in collaboration with the German resistance organization Forschungsgemeinschaft 20 Juli 1944, this fascinating documentary recounts the story behind the plot led by Claus von Stauffenberg to assassinate Adolf Hitler in 1944.

Having only recently viewed the previous version, I don't come to Valkyrie as a blank slate. I have many preconceived notions, which left me feeling completed. Of course my first question after watching both movies was, just how much of the movie is factual and how much of the story is dramatized.

"Wounded in Africa during World War II, Col. Claus von Stauffenberg (Tom Cruise) returns to his native Germany and joins the Resistance, becoming involved in a daring plan to create a shadow government and assassinate Hitler.

Soon, events dictate that he become a central player -- and he finds himself tasked with both leading the coup and personally killing Hitler. Based on true events, this drama co-stars Tom Wilkinson, Bill Nighy and Eddie Izzard."

I found several reviews by people claiming to be knowledgeable in WWII history, that believe the story was accurately portrayed. I am satisfied that it was at least partially successful. Elyse Reel of The Village News Online had this to say about Valkyrie ...

"The tricky thing for Valkyrie is that its ending is no secret: Hitler wasn't killed on July 20. The plot failed, and Stauffenberg and his co-conspirators were executed.

To expect anything else is like crossing your fingers and hoping the boat won't sink in Titanic or Norma Shearer and Robert Morley will escape in Marie Antoinette. The historical record is firmly established."

I plan to use the movie as a springboard to further our study of WWII history in order to help my son to better understand the reigning politics of the day.

This compelling story about a group of Hitler's inner circle who plot to kill the Fuhrer. The producers had located many of the surviving children of those conspirators who tell the story of their fathers' plan — best known as "Valkyrie" or the "July 20th plot" — to rid Germany of its obsessive leader.

I am particularly curious about the part in the film, when Hitler is reviewing the rewrite of the Valkyrie orders he's about to sign and Hitler turns and says to Colonel Stauffenberg, "You know your Wagner, Colonel?" (after a brief pause, he continues) "The Valkyrie Handmaidens of the Gods, choosing who will live and who will die, sparing the most heroic from an agonizing death. One cannot understand National Socialism, if one does not understand Wagner."

Apparently, Hitler was refering to Richard Wagner, who authored four operas in the late 1800s taken from Norse Mythology. I can't wait to learn more on this topic.

Valkyrie has a PG-13 rating for violence and brief strong language. The movie is, of course, about an assassination attempt, however the violence wasn't overly dramatized or sensationalized, in fact I was impressed that they covered the gruesome parts tastefully. A lesser director may have been tempted to take advantage of the subject matter, making it far more brutal.

Of course parents should use their own judgment in deciding what is appropriate matter for their child. A sensitive child certainly should not be exposed to the subject matter at all. My son wants to be a hero and 'save the day,' he loves Sir Lancelot, the Arabian Knights, The Princess Bride, Bibleman, etc., and would identify with the hero. He's struggling to learn how to be a man and at 12¾, he's developing his own strong sense of honor and responsibility.

A couple more movies of the same era I have already watched with my son, and highly recommend are — of course the classic movie, "The Sound of Music," and a lesser-known film set in Austria is "Miracle at Midnight."