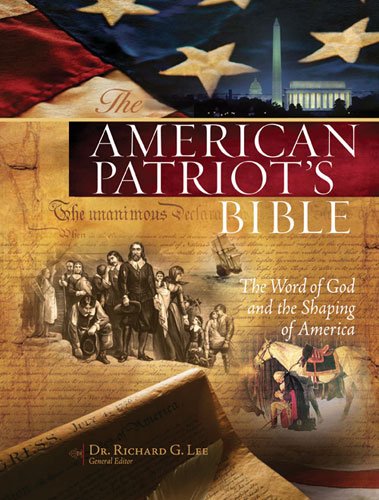 The Word of God and the Shaping of America

This extremely unique Bible shows how the history of the United States connects the people and events of the Bible to our lives in a modern world. The story of the United States is wonderfully woven into the teachings of the Bible and includes a beautiful full-color family record section, memorable images from our nation's history and hundreds of enlightening articles which complement the New King James Version Bible text.

America has a diverse history, one that has it's very roots in Christianity and while the majority of Americans have grown up with this knowledge, most of us would be hard pressed to recall more than one or two instances of actual historical fact. As a homeschooling parent I was thrilled to learn about The American Patriot's Bible.

The American Patriot's Bible provides the reader with ample evidence of our Christian heritage and insight into the foundations of our system of laws and public mores. I was delighted to find references to a large number of our nations historical documents.

This well illustrated edition of the New King James Version of the Bible has large type making it easy to read, perfect for middle school aged children and over to read, as well as us old-timers, with poor eyesight.

The book contains a family records section that is quite impressive; the author had insight enough to include a section for "Ancestors of Interest," which budding genealogists should find helpful. A map of the United States and a page listing each state, the order and date when they were admitted into the union is also included for us history buffs.

In reading through the diverse commentaries, historical accounts and founding documents I found many obscure items of interest, to the student of history. For example, I learned that...

Until the American Revolution, America's Bibles had been shipped in from England. When that supply was cut off and supplies dwindled in 1777, Congress resolved to import 20,000 copies of the Bible from other countries, based on a Congressional committee's determination that "the use of the Bible is so universal and its importance so great."

One of the most valuable features I found contained in the American Patriot's Bible was a chapter heading for each book of the Bible, which contain the author of the book, the time period when it was written, the theme of the book as well as key verses and the key chapter of the book. As a student of the Scriptures I find that information very useful.

Overall I am pleased with the presentation and contents of this book and plan to use it as part of my sons American History curriculum this coming school year. It makes a fine addition to our home library and will be used often.

In the midst of the recession, a new Bible project is offering hope to rekindle the American spirit. The American Patriot's Bible (May 2009, Thomas Nelson) takes readers on a powerful journey revealing how faith has seen American citizens through troubled times, as well as impacted the overall formation of this great nation.

Joining with the sacred New King James version (NKJV) text are stories of American heroes, quotations from and articles about many of America's greatest thinkers, historic photographs, and beautiful illustrations that present the rich heritage and tremendous future of the United States of America.

A Beacon of Hope and Freedom

"America stands without equal as a beacon of hope and freedom in a hurting world. Our Founding Fathers delivered to us a system of government that has enjoyed unprecedented success: we are now the world's longest ongoing constitutional republic. Well over two hundred years under one form of government is an accomplishment unknown among contemporary nations," notes Dr. Richard G. Lee who serves as the general editor for the project, as well as founding pastor of First Redeemer Church (Atlanta, GA), and speaker for the There's Hope America ministry.

The American Patriot's Bible spotlights the people and events that demonstrate the godly qualities that have made America great. It connects three important elements: the teachings of the Bible, the history of the United States, and the connection it has to its citizens today. Throughout the pages readers will discover little known facts about historic events and other national treasures such as notations of every known Bible verse on which our presidents rested their hands when they were sworn into office.

As Andrew Jackson, our seventh President, said regarding the Bible, 'That Book, sir, is the rock upon which our republic rests,' notes Lee. "The American Patriot's Bible will help readers discover the cornerstone upon which America, and her great men and women, have built their lives and this 'one Nation under God.'"

The American Patriot's Bible's general editor, Dr. Richard G. Lee is the Founding Pastor of First Redeemer Church (Atlanta, GA), speaker for the There's Hope America ministry, and President of There's Hope for the Hungry food distribution campaign. He has served as President of the Pastor's Conference of the Southern Baptist Convention; is a member of the Oxford Roundtable (Oxford, England); a Trustee of Liberty University and Liberty School of Law; and a Board member of the National Religious Broadcasters. He was named "Father of the Year" by the Southeastern Father's Day Council and received the Ronald Reagan Leadership Award for 2007.