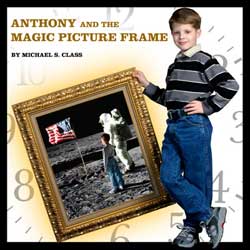 "I Recommend this Book to All Young Americans," says Buzz Aldrin about Inspiring History Book by Michael Class

On Anniversary of Apollo 11: 'Real' Photos in Award-Winning Book put Modern Boy on Moon with Astronauts in 1969

Seattle author and photographer Michael S. Class has used digital composite photography to place his twelve year-old son, Anthony, in the cockpit of the Spirit of St. Louis with Charles Lindbergh, in the laboratory with Thomas Edison, on the baseball diamond with Lou Gehrig, and on the moon with Neil Armstrong and Buzz Aldrin.

"I wanted to capture the interest of today's kids," says Class, "by turning American history into a grand time travel adventure." The museum-quality book, Anthony and the Magic Picture Frame, is recommended for grades 6-12. The Web site, MagicPictureFrame.com, displays some of the book's amazing photographs.

"The book's vivid narrative and captivating photographs transported me through space and time," says Apollo 11 astronaut Buzz Aldrin. "I felt that I was once again standing on the surface of the Moon in 1969. Anthony and the Magic Picture Frame tells it like it really was in America's early space program - the adventure, the risks, and the rewards. I almost believe that Anthony was there! I think that parents and teachers will appreciate the inspiring message this unique history book holds for America's next generation. I recommend this book to all young Americans, may they take us to the stars and beyond."

Years of meticulous research went into the book, and historical accuracy rules every page: Anthony takes readers through the science, technology, human drama, and politics of America's space program. Anthony's conversations with the people of the past are based on things they really said, all properly footnoted: his conversations with the astronauts are based on NASA transcripts.

"I wanted America's heroes to speak directly to America's kids, through Anthony," says Class. "Buzz Aldrin does that in the book, talking to Anthony about setting goals, taking risks, teamwork, and courage. Today, Buzz Aldrin is a strong and inspiring voice encouraging America's return to space, putting human footprints on Mars, and the great things that America's children can achieve. Buzz Aldrin donated copies of my book to children's charities and schools. He's Anthony's hero - and mine."

The book's inspiring message also comes from the moral lessons included in each chapter. The chapter about Lindbergh's flight is really about choosing one's destiny. The story of Lou Gehrig is one of a virtuous life. The chapter about Thomas Edison is really about business and the benefits of hard work. The story of Dr. Jonas Salk is really about dedicating one's life to a higher purpose. Anthony's observation of D-Day and the liberation of the death camps during the Holocaust is a testament to the reality of evil and the need to fight it. When Anthony meets his immigrant great-grandfather at Ellis Island, it's really a story about what it means to be an American.

The story of Apollo 11 comes with a message of hope for America's space program. Anthony says, "In my time there is not one child who has seen a man, or a woman, walk on the surface of the moon. My father reminds me of something that astronaut Eugene Cernan, the last man to stand on the moon, wrote: 'Somewhere on Earth today is the young girl or boy, the possessor of indomitable will and courage, who will lift that dubious honor from me and take us back where we belong.'"

Class included many subtle touches to convince his readers that Anthony "was really there." Anthony knows things that only an eyewitness to history would know: he sees Buzz Aldrin leave Soviet cosmonaut medals on the moon. Who do the cosmonaut medals belong to? Why did Buzz Aldrin bring them to the moon? "You'll have to read the book to find out," says Anthony, the time-traveler.

Anthony and the Magic Picture Frame was named Outstanding Book of the Year and Most Original Concept of 2006 by Independent Publisher, Reviewers Choice by Midwest Book Review, and Editor's Pick by Homefires: The Journal of Homeschooling Online. Nationally syndicated talk-show host Michael Medved calls the book "entertaining and educational."

Anthony and the Magic Picture Frame includes built-in tools for teachers: recommendations for hundreds of books, movies, songs, and places to visit, keyed to the subjects of each chapter. The author's Web site includes a fun final exam; the author's blog is a place for readers to discuss the book's moral lessons.