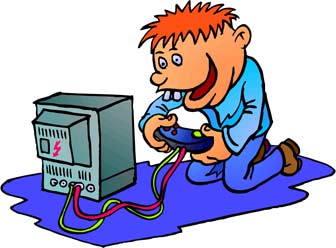 Mia responds to a frustrated parent on a homeschooling e-group. It's not uncommon for students who have attended the public school to have difficulty at first learning to manage their own time.

Help! My son only wants to play video games. He is trying to make contact with some friends but plans keep falling through so most of the time he is just home watching TV or playing videos. What do I do?

Have you tried asking him how video games are made? Does he know all the intricate detailed work and technology that goes into that?

Maybe try bringing it up, and just letting the idea brew for a while, try finding a documentary on the making of a video game and watch that together. Which part is he most interested in? Talk more about that and let it lead you somewhere.

If he is interested in the sound effects, dive off into the subject of Foley Artists (the ones who coordinate all the sounds in movies and video games).

Is there any one person who designs video games that he respects? Is it the story behind the video games (does he respect the author of such stories)? All people, children included, listen more to people they respect. How did those people get where they are today? How did they become successful? What other hobbies/ activities/ interests are they involved in? Explore the question: Can I do that too?

Of course this goes for movies as well. How are movies made? How do they come up with the stories? Are their similar stories out there I'd be interested in? How do the actors learn their parts? What other movies have they made? Who are their heroes? How do you make the set? How do you do special effects?

You can even start out with a movie that is not exactly all-around educational. If he liked Ghost Ship, does he like Pirates of the Caribbean? If he likes Pirates of the Caribbean, then would he be interested in learning about other pirate stories? What about the movie, Masters and Commanders? The whole time I watched that show, I thought to myself, wow, look at the separation of class. Good subtopic.

Naval Warfare. Building models of ships, which model is fastest or easiest to float? Why do you think that is? Talking about all the different kinds of ships. Which cultures incorporate boating into their lives/history? Try going to museums and looking at artifacts from different eras (especially the one he's interested in).

Or, just ask him about what people did before television. When was it invented and by whom? How did it change people's lives? Who had the brilliant idea for video games and how did they start out? I see a research paper here: "Video Games: The Genesis of Sega Genesis" (just joking)

I read in Discover magazine, I think it was and can't wait to find out more about it: "The Anti-Video Game" from their Emerging Technology section. It talked about a new interactive CD ROM game. You wear biofeedback sensors (that look like rings and are connected by wire to your PC) on your fingers; the object of the game is to remain as calm and relaxed as possible, during the exercises (in the example, an archery session and building a fire) in order to successfully complete the game. You are supposed to be able to apply the self-calming you learned, during the game to your real life. Sounds interesting anyway. Visit "The Journey to Wild Divine".

NASA has also been working on same kind of technology to help kids with ADD learn how to concentrate.

If you have a video camera, consider making a "movie" or "TV show" with him. He can write or choose the story, format, help make the set. Then, have him make another show. Keep it fun, keep it going. You can have him choose between two of your idea proposals for a show to make, or have him come up with proposals and pitch them to you like you are the producer. When he has made several shows, have an "awards ceremony" or a "film festival" where friends and family can vote for his best work. Make some kind of trophy/certificate, something he can display.

If you can do a "news broadcast", that will set the stage for a lot of subjects. (And the set is easier to manage!) he can be the investigative journalist or the TV anchor or whatever. Have him do a report on a "breaking news subject", a lot of opportunities there.

If he likes the acting part of the movie, cast him in a role. Let him try out for your movie. Assign him a role as a historical figure, perhaps, or a person he would consider important or exciting, like a jet pilot or astronaut or underwater explorer. For his first role, have him audition. He passes the audition and gets the role if he portrays the character accurately, and to do that he needs to research the role.

If he just wants to watch the shows, and that's all he seems to be interested in, have him critique the shows! Compare them to one another. What are the differences in the director's styles, talk about the camera angles, etc. Find something to draw out into a tangent you can follow that will lead you to another, broader subject.

Cutting back on his TV and video time is fine but sometimes you might have to give them an activity to do instead, to get them started, to get the momentum going, until they learn to find things to do on their own. Make it natural. Keep it fun, keep it going. It's what all our educational consultants keep telling us!

Oh, and PS, back to the whole ships idea, learning about how they found the sunken Titanic is a great tangent. ;)

Learn How to Create Video Games