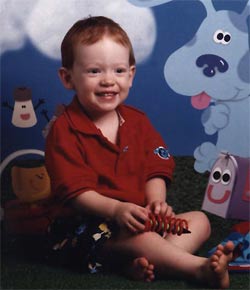 Building an Enthusiastic
Reader From Scratch

Thousands of books have been written on the subject of reading, specifically how to teach a child to read. There are books on methodology, the mechanics, learning styles and the importance of reading to your child.

You can spend hundreds of dollars on reading how to do it, you can purchase boxed curriculums, workbooks and expensive reading courses or you could simply use what you know of your child already and just do it. Better still; let your son or daughter figure it out on his or her own.

Go ahead shake your head and call me nuts but my husband and I decided that our son would figure out how to read when certain conditions were met and we were right. First, he had to be ready to read, meaning his brain had to be developed enough for him to comprehend the mechanics of reading. Second, he had to want to learn to read.

We set the stage early.

When my son was still in the womb I read to him. The day he was born as soon as he heard my voice, he turned his head, to see where the sound was coming from, so he must have recognize my voice.

I continued to read to him until he was old enough to hold those cute little cardboard books in his hand. From that point on, he refused to let me read to him and would grab the book out of my hand whenever I tried. Needless to say, I didn't think he would ever learn to read on his own. After all, everyone tells you, if you want your son (or daughter) to learn to read, you have to read to him.

Instead of reading to my son, we played silly songs on cassette tapes, we sang together; we danced together and had a great time. I discovered early on that playing classical music in the evening helped him sleep.

We purchased a tiny table that had letters, numbers and animals that made sounds, as soon as he was old enough to stand-alone. When he was a year old, we built him his first computer and he played Reader Rabbit for Toddlers.

As he grew we continued to add fun learning items for his enjoyment. He played with alphabet blocks; we decorated the walls of our house with large colorful posters, changing them monthly. He had letters and numbers stuck the walls of his room, magnetic letters and words on the refrigerator, phonics tapes and videos to watch and listen to.

Practically every trip to the store we would purchase a new pen or pencil and notepad for him. He had an entire collection of Blue's Clues Notebooks that he carried around with him for at least three years. I firmly believe that reading and writing go hand in hand. So, be sure to provide plenty of opportunity for them to do both.

We put flash cards on a metal ring, with pictures of the alphabet and the sounds they make, which he carried around with him daily. One of our favorite games was a silly thing we did with the Step 2 Easel. With either chalk or a dry erase marker I would write a letter, when he wasn't around. When he noticed it, he would write another letter of the alphabet for me. It was a game that went on for months.

When he was four we bought him a new game that required a great deal of reading, at his request. I sat and played it with him a couple of times, reading instructions to him as we went. Then one day I was working and he began pestering me to come read things to him so he could play his game. He was hooked.

It was then that I informed him that he could play the game, when he had learned to read well enough to read the instructions on his own. While this may seem mean, it was just the incentive he needed to get motivated. He was determined to learn to read.

Different children learn by different methods and not being very familiar, at the time with my son's individual learning style (I knew for certain it was different from mine.), we took a multi-media approach. When we would purchase a new book for him, we tried to buy it on CD-Rom for use on his computer, on cassette for use on his tape player and on VHS, for use with the television.

Our thinking was that he would make the connection between the various items and they would reinforce each other. We also used the closed captions on the television whenever it was in use.

After he had learned to say all the letters of the alphabet, knew their sounds and could recognize them, we had a field day and labeled just about everything in the house. Using colored index cards once and sticky notes once, we neatly printed "door," "sink," "tub," "window," "desk," and so on.

Once he became familiar with them, we would mislabel things and see if he could figure out which ones were wrong and finally we removed all the labels and asked him if he could put the labels in the right place.

It was right around this time that we noticed he had a pronounced problem making the "L" sound. Well that just wouldn't do. Having had an older child who had been through speech therapy, I had a good idea how to deal with this problem. So, we decide we would do our best to help him at home, before making a decision to seek professional help.

We began by practicing making various sounds, being sure not to make him feel self-conscious but to make a game out of it. We played with tongue twisters and trying to rhyme as many words as we could that used the "L" sound. We also would have him practice saying "la-la-la-la-la-la" each day, the whole family played and we had great fun with it.

One night at dinner we had sat down to eat and the table had not been set completely. Zachary asked if he could have a fork, but Shawn and I were in the middle of a conversation with each other and did not hear him. When we turned our attention to him he had become impatient and frustrated, finally saying, "Can I puh-lease have a fork! You know, la-la-la-la FORK!"

He began reading all on his own around the age of 4.5 and was quite proud of himself for "his" accomplishment. It was all his own and no one else could take the credit for it. The day he began to read, he was on cloud nine and simply beaming the entire day.

Play a Game of "Call Box"

For several years we would play car games. A very simple game we would play with him, from the time he was about three-years-old, we called "Call Box." Here in California emergency telephones line the highway at regular intervals, they are labeled with a huge sign that simply says, you guessed it, "Call Box." The idea was simply to get him to notice the signs, making him aware of the use of letters. So, whenever anyone saw a sign we yelled out, "Call Box." It was a race to see who could see one first.

In summary, if you can teach your child to eat with a la-la-la-la Fork, you can help your child learn to read. Start early, keep it simple, and make it fun. While I personally don't believe young children need special curriculum in order to learn to read, there may be that special child out there that can benefit from it.

If you feel you need to buy a book on the subject, do yourself a favor; purchase one that will help you discover your child's learning style. Knowing how your child learns best will help save you untold hours of frustration and keep your son or daughter from having a meltdown. If you aren't enjoying yourself and your child isn't happy, something is wrong.

Don't keep doing the same old thing, if it isn't working. Sometimes you will find another method that works better, use it. Other times it's just too soon to introduce your child to a certain concept, put it away and try again in a few months. It's amazing the things that time will cure.

Remember the Jones' don't live here and you don't have to keep up with them. Education is not a race and I've never met a child that was truly behind. Children learn and grow at their own pace, no amount of prodding, nagging or yelling will change that.