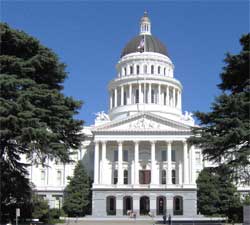 California's State SARB met May 9th in Sacramento, where a draft version of the new SARB handbook was released. Several items were on the agenda for discussion, but the hot topic of the day was the Private School Affidavit process, which came under fire by several board members.

Reporter Jennifer Sparks with Neighbors of Sacramento was the only reporter to cover the meeting. In an article, published in the Sacramento Bee on April 4, 2002 Sparks noted, "Tucker said he has scheduled a meeting May 9, between the state's School Attendance Review Board and the Department of Education to discuss reforming and clarifying compulsory education laws." However, Tucker was a "no show" at the meeting.

The testimony goes on to say, "The current position of the CDE is indefensible in light of the fact that it would make California the only state in the Union requiring teacher certification of a parent teaching a child at home. This position is indefensible in court because of the compelling state interest/least restrictive means test that would be applied to any court case prosecuting a parent for failing to send a child to school who had complied with the private school exemption.

The school district prosecuting the parent would have to demonstrate that teacher certification for home educators was essential to accomplish the state's legitimate interest in education, which is literacy and self-sufficiency. In light of the fact that 49 other states have fewer restrictions, there is no way that this could be proven. This is the reason that virtually no one has been prosecuted in California who has been referred to district attorneys and city attorneys by school districts. These attorneys recognize the futility of these prosecutions."

Representatives from each of the statewide homeschooling groups were present at the meeting.

The board indicated they would not be seeking changes to their current policy. According to insiders close to the CDE, homeschoolers will continued to be "picked off" one by one because of concern over a well organized homeschool community and the potential for more negative publicity targeting public school officials. School officials were advised not to launch an open assault on homeschooling families, to avoid being deluged with email, telephone calls and faxes.

Discussion regarding ISP's (Independent Study Program's) revolved around concern for students who are known to be unmotivated. Concern was voiced regarding students who manage to show up for 1 or 2 hour teacher meetings to avoid being placed in juvenile hall. It was stated that the ISP was the most unsuccessful program implemented to date. On a side note, schools are reluctant to place students in an ISP unless or until they have been expelled, at which time it becomes a matter of economics. Children who are enrolled still receive full funding. ISP Operations Manual .

Maria Teresa Ponce, Vice President of Mission Learning Center, a member of the California State SARB and Educational Program Consultant, Pupil Services, San Francisco Unified School District spoke out in support of homeschoolers. She also indicated her own children were enrolled in a charter school where they were doing very well.

Our sources indicate home educators will continue to face an occasional challenge. Public school organizations have enlisted the help of many attorneys' to aid them in combing the laws for not only funding, but laws that will give them the upper hand. Attorneys who represent school interests included:

Rebecca Santos and Jane Clark addressed the board with concerns for parental accountability. They were seeking a verification process to comply with Ed Code 48222, which states in part; "Exemptions under this section shall be valid only after verification by the attendance supervisor of the district, ... that the private school has complied with the provisions of Section 33190 requiring the annual filing ... of an affidavit or statement of prescribed information with the Superintendent of Public Instruction."

Santos stated her concern stems from contact with parents who, after having been notified of SARB intervention, file the R-4 affidavit, claiming to be homeschoolers in attempts to avoid prosecution under truancy laws.

Ms. Clark went on to request parents be fingerprinted, provide background checks, submit a program of instruction outline and adhere to "reasonable standards," which were not defined. She also requested the deadline for filing the private school affidavit be moved up to August 1 annually and that parents be required to attach copies of their BA degree and results of their CBEST exam.

It was noted by Sherman Garnett that three-quarters of all private school affidavits filed with the state have fewer than 5 students.

Sources tell us that Lois Baer, assistant District Attorney for Santa Clara County would like to subject parents to a proficiency exam administered to those wishing to teach their own children. This would apply only to those with fewer than 5 students. She is also the author of a very deceptive SARB process outline in Santa Clara Co. aimed at parental intimidation. Her tactics are questionable at best.

Ms. Baer spoke recently at the CASCWA Conference held in Fresno, instructing school administrators across the state in the proper implementation of her truancy program. Boards are instructed to send strongly worded letters (on D.A. letterhead) to coerce unsuspecting parents into compliance. They are instructed to document everything, hold SARB hearings in an intimidating environment, such as the local Sheriff's office, probation office or courtroom. It is not by accident a uniformed police officer is standing by during SARB hearings. These meetings are designed to force parents into compliance at all cost.

Carolyn Pirillo seemed very concerned over compliance with the Brown Act. At times it appeared that she was instructing SARB members in ways to circumvent the law, going into detail about how many people comprise a meeting, detailing what constitutes a serial meeting. Discussion focused at one point around forming small committees of two or three people as a means of getting around the open meeting law. It was obvious the presence of homeschoolers during the meeting made the board uncomfortable.

In summary, it is clear California Homeschoolers would do well to continue to organize and prepare for an eventual court battle. While it appears homeschoolers won't see a direct confrontation anytime soon, it will be important to continue to grow legal defense funds, in the event a serious challenge is ever launched.

School officials realize home educators are well organized and capable. It was apparent to those present; the board is not of one mind. Very few members are hostile towards homeschoolers and several volunteered during the meeting that they have family members or friends who homeschool. Efforts by parent educators in conjunction with state homeschool organizations have paid off. Almost everyone knows at least one homeschooling family today.

Parents are advised to know the California Education code as it pertains to private schools. Keep a copy handy and refer to it often. Immediately contact reliable advice prior to complying with any demands made by the state. The CDE cannot be relied upon to provide accurate representation of the laws regarding education within the state.

It is unlikely there will be a serious legislative challenge anytime in the near future. Members of the CASCWA legislative team met with several legislators last fall and most are reluctant to address the homeschool issue head on. It is certain they will continue in their attempts to insert questionable language into obscure bills, keeping California Homeschool Network's Legislative Committee on its toes.