If you have a television you have probably seen the "California First Five" commercials, which have been flooding the airwaves recently. If you are like most homeschoolers, the ads tend to grate a little on the nerves.

Diane Keith, well-known author, speaker and homeschooling advocate has decided it was time to act, by creating a new online discussion group, where parents can obtain answers to their questions and a new website, which is located at: http://www.universalpreschool.com/

The site is packed with resources. You will find plenty of ideas for fun adventures to take with your preschooler, as well as legislative alerts, research and much more... 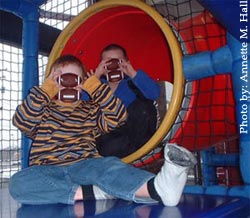 Diane invites you to join her online.

It is a personal New Year's goal of mine to provide a viable forum for offering a dissenting opinion on the topic of government funded and/or mandatory "Universal Preschool." The concept of "Universal Preschool" is one I've been earnestly watching since Al Gore endorsed it in his bid for the presidency in 2000.

The idea that the state should dictate and/or provide care and some kind of "schooling" for all young children ages 2-5 is one that I oppose. I thought that I'd see a parental rights organization rise to combat such a plan -- but, to my amazement and consternation, it hasn't happened.

I am a resident of the state of California. Legislation to instigate mandatory Kindergarten has been introduced here from time to time over the past several years. So far, it has failed. However, the CA State Superintendent of Public Instruction, Jack O'Connell recently proclaimed that providing "Universal Preschool" is a priority for his administration in 2005.

This announcement came on the heels of a report published by the Economic Policy Institute titled, "Exceptional Returns: Economic, Fiscal, and Social Benefits of Investment in Early Childhood Development" by Robert G. Lynch. In it, the author makes a fiscal case for U.S. government funded preschool programs.

The book's introduction says,"...this study illustrates the potential benefit to the solvency of the U.S. Social Security system from ECD investment." That's right, the solution to the government's Social Security woes is to send kids to preschool. Government funded preschool programs will be an exercise in social engineering to make sure we have human resources -- a guaranteed work force -- that will assure future generations get their Social Security checks! You can get more information about the book as well as download it for free in pdf format and read it at: http://www.epinet.org/content.cfm/books_exceptional_returns.

Additionally, the California Education Master Plan clearly outlines the states plans to provide an "education system in which all sectors, from pre-kindergarten through postsecondary education, are aligned and coordinated into one integrated system." [View the CA ED Master Plan]

Lately, I have noticed a dramatic increase in the California First Five advertisements that essentially say, "If your child goes to preschool, they will do better in Kindergarden, better in elementary school, better in high school, will more likely go to college, and will get better jobs." It's interesting to note here, that CA First 5 was developed in response to The Calfornia Children & Families Act of 1998 and their mission statement is as follows:

"Current research in brain development clearly indicates that the emotional, physical and intellectual environment that a child is exposed to in the early years of life has a profound impact on how the brain is organized. The experiences a child has with respect to parents and caregivers significantly influence how a child will function in school and later in life.

The California Children and Families Act of 1998 is designed to provide, on a community-by-community basis, all children prenatal to five years of age with a comprehensive, integrated system of early childhood development services. Through the integration of health care, quality child care, parent education and effective intervention programs for families at risk, children and their parents and caregivers will be provided with the tools necessary to foster secure, healthy and loving attachments. These attachments will lay the emotional, physical and intellectual foundation for every child to enter school ready to learn and develop the potential to become productive, well-adjusted members of society."

I find the use of the word "attachments" puzzling, since separating young children from their parents at an early age hardly fosters attachment to mom and dad. Attachment and dependency on the state as nanny, seems more likely. I strongly object to such an attachment! I keep thinking I can't be the only one who objects -- but I've seen no dissenting position represented at all on TV, on the radio, or in newspapers!

Yet, I am aware of a number of revered child development experts (for example, David Elkind and his book "Miseducation: Preschoolers At Risk" who have conducted studies and written essays strongly opposing the institutionalization of young children and warning of the potential damage psychologically, emotionally, and physically to them of not only separation from their parents and home, but the introduction of early academics as well. These people need to be heard! At the very least, we must open this topic for debate before legislation is passed to implement it. Future generations are at risk!

While much of my concern stems from what is happening in my home state of California, state mandated Kindergarten and plans for Universal Preschool in other states are already underway. Some of these programs will rely on federal funding. This is a topic for national debate -- and one of my goals is to get it exposure.

While my husband, Cliff, and I did homeschool our two sons, this is not specifically a homeschool issue. It effects every young child in the country. We should all care enough to examine the research and claims made in support of government funded and mandated Universal Preschool before we allow it to take hold.

With that in mind, this group is for the purpose of planning strategies on:

This is not a discussion list of the pros and cons of Universal Preschool. This list is for concerned parents, educators, policy makers, and others who oppose the implementation of government funded and/or mandatory Universal Preschool and want to do something about it.

As I mentioned, I homeschooled my two sons. I live in the San Francisco Bay Area and have been an outspoken activist for homeschooling since 1991. I am a writer, speaker, columnist and author on the topic of alternatives in education. I am the editor of Homefires~The Journal of Homeschooling and I wrote the book, "Carschooling: Over 350 Entertaining Games and Activities To Turn Travel Time Into Learning Time" published by Random House. I am willing to contribute my time as well as my writing, speaking, and networking skills, and provide some initial funding to achieve the goals listed above. I am already working on developing a website www.UniversalPreschool.com, and I also moderate a Yahoo Groups list providing daily eduational activity suggestions for parents of preschoolers. You can join that list by sending a blank email.

I look forward to learning more about each of you, and finding out how you can help with this cause. :)