Mastering the messies and ending the clutter. 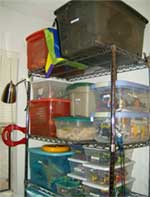 My son is at that age where he hasn't quite grown into his body and his mind is focused and clear - not about anything that anyone else would understand, yet solidly focused and determined. His passion dujour is Legos. A couple of weeks ago it was Transformers. Before that: Attacktix.

Now passion is one thing, but the disaster it leaves behind is monumental. We are talking about a whirlwind of toys strewn around the room with no rhyme or reason. When friendly requests of organization go unheeded, things can get a little tense. You know the dance. It took more time to get his room clean that it did waiting for my husband to write something, which can take months.

We are nearing the end of the first week after a total change in plan, and a good deal of plain old good-will. I asked my friend for advice. She recommended that I just close the door. After all, it's his room. He should be able to keep it anyway he chooses. I tried to follow her advice, I really did.

I just couldn't do it. It was one point of frustration for me that drove me close to insanity. For starters, I knew my son was wasting way too much time searching for lost items in his room. We found 8-pair of sunglasses, none of which he was able to find when he actually needed to wear them.

This was frustrating to him. So, we sat down and had a chat. I told him what I envisioned for his room and asked if that sounded like something he would be interested in. He said that it was and he would be willing to try "harder" to keep his room clean. I promised to help. We were off to a good start.

The Child is in Here, Somewhere.

Since his room is pretty small, we already had many of his toys in plastic bins. They were sturdy, but they were a thick dark plastic, making it impossible to tell what was inside. Another issue promptly presented itself: Every bin was a jumble of items tossed in and forgotten. Long ago we had purchased plastic carrying cases for his Hot Wheels, so that was pretty much a non-issue, proving that he was capable, given the tools, of keeping things organized.

So, it only stands to reason that he could do the same with other items, given the tools to do so. At this point I was certainly willing to try anything. It was time to go shopping. Our first trip yielded 11 large (92 qt. Sterilite) clear plastic bins with locking lids and half dozen shorter clear plastic bins (66 qt., Sterilite) with locking lids, perfect for under-the-bed storage. The locking lids were important because loose fitting lids and those that don't close properly tend to spill frequently -- adding to the problem.

The large bins were terrific for storing winter/summer clothes (out of season), because it was not only instantly recognizeable what the actual contents of the bin were, but it was possible to actually see, without opening, if the item one was looking for was within that container. We also used a few for Lego storage and storage and for his collection of Transformers. They were impractical for other items and many ended up a hodge podge of miscellaneous items totally unrelated to each other. Not a perfect solution for his smaller toys.

After a couple more false starts, we finally believe we found the solution. One that will help my son make better use of his time and allow him to clean up with ease.

We purchased a large commercial utility shelving unit, one that will hold 500 pounds per shelf and a new bookcase. The bookcase didn't add much space, but the shelves were adjustable, allowing us to organize it better. We even managed to have a shelf for his small (non-electronic) games.

(Refresh this page for more selections)

You have seen those tiny drawer containers, which allow you to sort nuts, bolts, screws and nails. They work perfect for trading cards, rubber bands, thumb tacks, yo-yo's, even a drawer for Lego "heads" and yet another for Lego bodies, each neatly labeled with my handy-dandy label maker. It takes sheer will-power to resist labeling every shelf and drawer in the house...so far I've been able to resist, mainly because it will take time - time that I don't have.

My husband interjects: Nobody is happier than I. All I can picture is this one "Blue's Clues" episode.

It wasn't an easy task trying to decide how to categorize some items. We started with those mixed bins I told you about earlier. I started sorting into open bins, which lay on the bed, opposing lids tucked beneath them for safekeeping. As the small bins would be filled, their contents would be estimated and then moved to either a larger or smaller bin.

The key here is having a variety of sizes, not so many that they would be difficult to stack but enough to closely match the volume of contents. We ended up with 8-different sizes, which included two sets of stacked three-drawer paper trays, giving him a total of 6-drawers at a cost of $6.97 each. The paper trays are handy for not only printer paper but writing tablets and even unused baseball card holders.

One really large bin was filled with nothing but balls and other sports equipment, and then labeled (the label is the important part. My son created a partial list of his bins in, order to give you an idea of the kinds of items you will need to be prepared for.

We spent a fun 3-days sorting out two bins. It was nice to work with him, it gave us both a chance to communicate and know each other better. I let him make as many decisions as possible and when I disagreed with him, we would each state our position and negotiate from there. Sometimes he won and sometimes I won - we each learned through the process.

(Husband note: Warning! Be careful allowing your wife and child to "negotiate" categorization of items. At times it felt that I was listening to an international debate, where neither ambassador understood the others' language. Be prepared to intervene.)

My husband doesn't agree but, I don't believe everything can be categorized -- at least not for these purposes. For example: his fanny packs and water bottle container. These are items he uses regularly, having them tucked away in a bin simply isn't practical. So, we picked up some magnetic clips that can be used to hold either small light-weight items or clipped to the metal shelving unit to hold heavier items.

We added a couple of clip lamps to the unit, giving him added lighting in his room, with the added bonus that we don't have to worry about him knocking them over. After all boys will be boys.

Once we were finished (at least for the most part) we had a little fun quizzing our son on where things belonged. I'm happy to announce, he passed with flying colors. We were able to breath a sigh of relief. It was a long project: but one that seems to be working.

It's been about two weeks now, the child still doesn't automatically pick things up as he goes. However, now instead of "Oh, man. Why do I always have to clean my room?" He now responds with, "Ok! That's easy, it won't take long at all." This is huge!