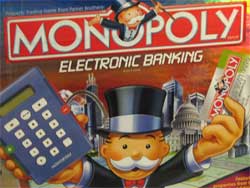 By: Shawn and Annette Hall

I suspect most of us (the 40 and over crowd) have childhood memories that haunt us, you know the one - the Monopoly game that wouldn't end. It just went on and on and on and on and on... I can personally recall games that lasted not only into the wee hours of dawn, but games that were marked by days on the calendar. Those games were won, not out of skill or even dumb luck, but won through sheer endurance. Lesser women would have quit.

Sure the first few hours are fun but as the night wore on, patience began to wear thin and tempers often flew.

You will be happy to know that Hasbro finally invented a Monopoly game that can be played in just a few short of hours. It's called Monopoly Electronic Banking edition and I personally find the game quite enjoyable. Our family has played the past two-days in a row (two separate games) and I'm not sick of playing it yet — that's really saying something. Especially considering my history with Monopoly.

To be honest, I wasn't sure I wanted to spend almost $40 for yet another version of Monopoly, after all, we already own the original Monopoly game, a software version of the game to be played on PC, and Monopoly Junior for PC and we didn't pay anything close to $40 for all three combined.

Our son haggled and cajoled us and finally talked us into what I was sure would turn out to be just another overpriced game that would end up gathering dust on yet another shelf in our tiny house. Frankly, we fully expected it be a mistake.

The good news is that the game has come down considerably in price since this article was originally posted. You can now purchase this Electronic Banking edition for only $23.24. Now I wish I would have waited a little longer to purchase mine.

One of the best improvements this game has over the original version is the minimal clean-up time. There is no cash to dole out when setting up, no cash to get ripped and mangled during heated play and best of all, no money to clean up when the game is completed.

This game comes with a handheld ATM Machine -- sort of like the ones you find in the supermarket -- and six ATM cards. I was concerned at first about the handheld device getting damaged from being dropped or not being sturdy enough for a night of the Hall clan yanking it back and forth, but it sustained being dropped at least 15-20 times during our two-game session and has suffered no ill effects that I could detect. The plastic ATM cards are pretty sturdy, too, and held up well under use.

Property — What's in a Name? 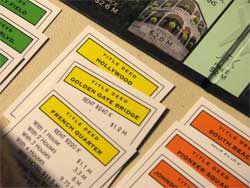 Hasbro was smart to keep the same color scheme as the original game, but they went one better and changed the names to familiar, more modern, places, such as; Hollywood and The White House. My son and husband had a colorful competition going regarding who would be next to own The White House. Seems everyone else has owned it — why not us?

The rules were easy to follow, but we discovered through play that nowhere in the rules was "Property Tax" mentioned. That problem was easily resolved. We let Google direct us to an online version of the rules.

When we didn't like the answer to the Property Tax question, we changed the rule, to better suit our liking. For the record, the question was "what counts when tallying up the '10%' option for Property Tax?" The answer we found: Everything. Our much easier to deal with alternative: just the cash on hand (ten percent of the value on your card).

Since our son was only 11 at the time, we didn't want to make the game too difficult, especially since math is not his favorite subject and playing games, like this one helps him to understand the concepts, without being a drag by requiring him stop playing to do a bunch of math problems. He still asks to play this game.

One of the first things you'll notice: If during play in the original game you normally paid money to the kitty, to be claimed when one lands on free parking (who doesn't?), there is no way to do the same thing in the Electronic Banking version. So, to resolve this, we added another rule. If you land on Free Parking, you get 2 million dollars (same as passing Go).

Oh, did I forget to mention that all of the property values have been changed. Instead of paying $260.00 for a property, that same property costs you $260,000. Instead of a $200 payday, you earn $2 million. Even with what looks like quite a lot of money (you start out with $15 million), you can go broke very quickly if you aren't careful. 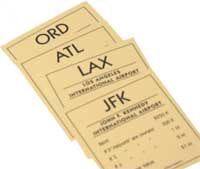 Also, you will notice very quickly there aren't any railroads in the game. Now they're all airports. Like JFK International Airport, LAX and O'Hare. And you still can't convince the person that owns them to let you take a free ride all the way to Go when you land on them. ;)

The original Monopoly Game had a very sparse board. All of the properties were essentially colored bars with the title of the property and the price. The rest of the property area was blank. The newer game adds colorful pictures for each property - things like Times Square, The White House, and Disney World. 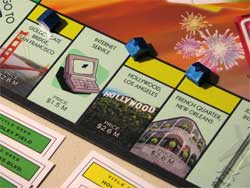 While this is all fine and dandy, the pictures are very dark, and the tokens are still very dark, so it's easy to "lose" where you are on the board even if you're paying attention. I personally would have lightened these images to provide better contrast. The houses and board are still the same size, too, so putting four houses on a property results in making a mess of it — and nobody can behave themselves when landing on a property with four houses, so they end up bouncing all over the board — just like in the old version. The dice, too, are dark blue. Nothing like making a consistent color scheme, but it's so consistent that everything runs together. Not enough contrast to make it easy to use. When you buy this one, take your white dice out of the old game for this one, you'll thank me for it later.

All in all, I'm very pleased with the game. It's not too early to think about picking this game up for the kids for Christmas. This is one even mom and dad will enjoy. And you probably won't go bald playing it, either.

The 8th annual Million Minute Family Challenge takes place September 1, through December 31, 2008. Anyone can join! All you need to do is spend some quality time playing a game with family and friends and keep track of the minutes your group played. Then visit this website to log your minutes and see how you and other groups are doing. Posted November 3, 2008 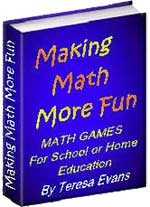