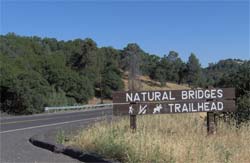 We made the excursion to Vallecito, CA and traipsed down the trail to Natural Bridges. You may recall we made the same trip last year. Oh, what a difference a year can make.

According to recent news reports, this year (2009) saw the second highest amount of run-off in these parts of the Sierra Mountains, due to the heavy amount of snowfall over the winter months. In fact, according to the California Department of Water Resources, New Melones Reservoir is just over 5 feet from the spillway. The only time the reservoir had reached a higher level was back in 1998 when the water exceed current levels by 2 feet.

With this bit of news, I fully expected to see a very high water level at Natural Bridges, but while there was evidence of the water being well above normal levels, the waters had receded and did not impede our wading expedition. The water was just as cold as I had remembered, which wasn't necessarily a bad thing, since we were all quite warm after making the trek down the mountain at 5 p.m., during the late afternoon heat. 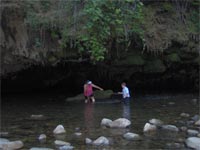 After spending some time resting on the rocks, soaking our hot feet, we waded through the frigid water. We walked around inside the cave, which was quite dark by this time, as the sun had faded and left us less than optimal light. I was a tad disappointed since one of my favorite memories of our last journey was laying on a huge rock near the mouth of the cave and watching the lights dance off the ceiling of the cave.

Once we were rested we made our way over the rocks, twisted tree roots, moss and rock-hopped our way upstream to see what changes had occurred in our absence. You can imagine our delight when we spied an entire school of baby lake trout, one of them a good ten inches in length. As we wandered around examining our surroundings we couldn't help but be in awe of all the life we found in our midst.

There were these tiny brilliant blue butterflies that darted all around us. They wouldn't quite hold still enough for us to get a picture of them. We saw several lizards, a few squirrels, plenty of birds and an elephant. (Just kidding about the elephant.) We even found a crawdad that decided to come out from under his rock to visit. Crawdads are incredible swimmers and are well adapted to the water; I was shocked at how quickly he got around. 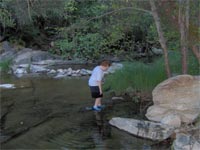 Shawn and Zachary made several attempt to try to capture it, so that we could examine it more closely, but the crawdad, experienced swimmer that he is, outsmarted the two of them and after a short game of cat and mouse, he went back into a crevice under his rock. Then it was off to try to catch a lizard. Even though we saw four of them that day, they remained elusive. The guys never stood a chance against those fast little legs.

I'm excited to report that this time our pictures actually turned out, for the most part. The cave pictures aren't what I had hoped for because of the dim lighting conditions but Shawn assured me that we would make another trip to Natural Bridges later in the year. I can't wait to go again... well maybe I can, I recall the trip back up the hill. 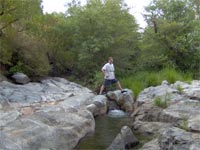 Since we had arrived so late in the evening, we had to leave before it got too dark for us to see our way down the winding path; of course we didn't think to bring flashlights. I would advise anyone planning to visit Natural Bridges to either bring a great deal of Cutters mosquito repellent to protect them from the mosquitoes or avoid coming late in the day. We started our return trip around 7:30 p.m., to allow plenty of time to make the 1.5-mile hike and reach the car before dusk. The climb isn't so terrible, but given the rocky terrain along with the fact none of us are what you'd call seasoned hikers (we venture outside when the mood strikes), we overdo it and pay for it later.

Needless to say, we were all sweating by the time we reached the top of the first set of stairs. Though there are several sets of picnic tables along the path to sit and rest, we didn't dare stop because each time we stood still for just a sip of water we were attacked by 20 or 30 mosquitoes. It was unbelievable. These were the tiniest mosquitoes I have ever seen and though they truly made pests of themselves, none of us were bitten more than once or twice. I had fully expected to have bite marks all over me.

We finally made it safely back to our vehicle without further incident, and though I am still a little sore, two days later, I'm no worse for wear.

The next trip we make will be an early morning trip, I won't forget the mosquito repellent and I'm really hoping to brave swimming through the cave to finally see what lies on the other side. This was a wonderful family outing and it was well worth the effort to get there and back, regardless of the time of day.

Some suitable to be used as wallpapers for your desktop.