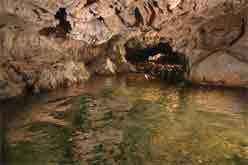 With fall fast approaching and heat subsiding more each day, many people are heading outdoors.

In typical homeschool fashion we intended to make the most of the local offerings. To that end, I was instructed to scope out the local area for possible day trips.

It was during one of these fact-finding excursions I stopped into Moaning Cavern, located on Parrots Ferry Road, off Highway 49 between Columbia and Murphys, for information on a group tour. There I met a bright enthusiastic young man who was very helpful in pointing out local attractions. He highly recommended we visit Natural Bridges, a local swimming hole.

Just as he had indicated the sign for the trailhead was easy enough to find. After parking the car on a desolate stretch of road, which appeared to lead nowhere, I made my way to the top of the trail. Looking down the steep slope, I determined that it was probably best not to attempt the hike alone. Disappointed I made my way home.

A few days later I went back, as I was anxious to discover what lay below on the trail. Walking stick in hand, son by my side and a supply of drinking water, we were ready. It was a little unnerving not knowing what lay ahead but we proceeded anyway.

The upper portion of the trail was a little challenging, as it was rock-strewn, then gave way to a winding well-appointed pathway, which wended its way down the mountain in a lazy fashion.

The three-quarter mile hike was a comfortable decline. At one point about halfway, we found ourselves with a decision to make - the trail had split, one path turning left, the other heading right. Following a short debate, we decided to take the wider of the two trails. Turning right we proceeded with caution.

Having been told we'd find a swimming hole at the bottom of our trek, doubt began to crowd my mind, as we meandered along a dried up creek bed.

What we found at the bottom of the trail was incredible. There before us was a gently flowing river; the water was very cold and refreshing. The water flowed through several large slabs of marble, over an elongated rock garden, gradually deepening as the water collected near the center of the cave.

The natural bridge overhead had formed over thousands of years from lime deposits and various rock formations and minerals. Various plants and fauna could be found both on and around the "Natural Bridge." The bridge above had formed in such a way as to provide an overhead canopy, which provided protection from the hot sun.

As my son explored the beautiful slabs of marble stone, which could be found on either side of a narrow portion of the river, I found a comfortable spot on an enormous rock situated near the entrance of the cave. I watched a fascinating display of colorful lights on the roof of the cave, attempting to discern the point of origin. (Unsuccessfully, I might add.)

There was a waterfall toward the rear of the cave, which provided soothing background sounds. Several teenagers joined us sometime later and immediately disappeared through the cave to where daylight could be seen peering through a rear opening.

Rumor has it that there are a couple more caves connected by this same river system. I sat wishing I had brought a raft along, with which to explore the rest of caves beyond.

My son and I explored the cave formation for several hours enjoying our serene surroundings.

The day spent, we made our way up the hill; the climb up was considerably more challenging than our descent earlier that day. We paced ourselves, glad for the frequent picnic benches and the numbered markers, which we had scarcely noticed in our trek down the mountain.

Though Natural Bridges was a little further than our group wanted to travel for a day-trip from Calaveras Big Trees, we are planning a couple of field trips this fall. This site lends itself well to teaching science because of the wide variety of natural resources available.

Upon arrival home, my son exclaimed, "This was the best day ever." He can't wait to go back again.

When visiting Moaning Caverns, the young man had also shown me some magnificent pictures of "God's Bath," found in a geological magazine he had on-hand. "God's Bath," is a local haven, situated about a mile from the road, near the Clavey River. Our homeschool group will be hiking out to view this natural wonder. With any luck my camera will actually work and I'll be able to share pictures of that trip.