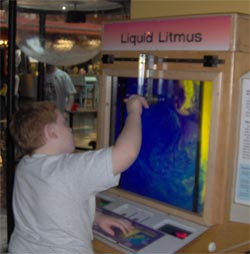 by: Shawn and Annette Hall

Living in the mountains as we do, trips to the city are few and far between, so it's a big deal when we decide to make the trek into San Francisco for an adventure.

Yesterday, we made the three-hour long drive in an early celebration of our son's greatly anticipated tenth birthday. No child living in the area should reach the age of ten, without having visited the Exploratorium and taking advantage of all it has to offer both children and adults alike.

Our first disappointment came when we arrived and paid our entrance fee. We had planned on experiencing the Tactile Dome and had spent several hours on the Exploratorium's website getting all the particulars, finding out there hours and the cost, etc. 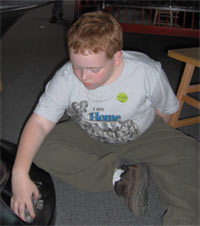 Zachary picks up balls after gravity has done its job.

We quickly recovered from our disappointment and happily made our way around to the various exhibits. We thoroughly enjoyed the over 400 hands-on exhibits, currently on display. We explored biology, physics, visual perception, listening, and memory activities. Our family spent a great deal of time learning about electricity, magnetism, batteries, and playing with the rotating sand discs, where you could sit quietly and create unqiue designs in the sand. We found it both calming and satisfying. My son particularly enjoyed playing with the iron filings and magnets. It was such a hit that we bought some to bring home with us.

Magnetic Iron Filings Were a Hit

Shawn's favorite exhibit is the magnetic table with the iron filings. He says, "I've loved this thing since I was a kid. Really, I could come to the Exploratorium and spend the whole day at this one table. We played building bridges between the magnets, making 'hair' and experimenting with dragging the filings up and over the magnets to build different patterns and see how powerful the magnetism was between the poles. It was also quite impressive to simply put a teaspoon or so of filings in my hand and then hold my hand a couple inches over the magnets, causing the filings to 'dance' in my palm. Very cool."

My wife and I have had discussions for years about my hearing. I took an audio test several years ago where the tester told me afterwards that I had the "best hearing of anyone he has ever tested," I tried to get him to put it in writing to show my wife, but he said he didn't want to get in the middle of that one. One of the exhibits at the Exploratorium was a frequency comparison tool. Basically, it presents you with a frequency (440hz) and your job is to try to "dial" another frequency as close as possible to the first.

I tried it several times, dialing the second audio wildly away from the settled value first, always resulting in placing "estimated" frequency between 338hz and 444hz. That's pretty darn good. Now someone tell my wife I really do have good hearing, okay? Wait, if I do have this really good hearing and I'm still not hearing her, will she think I intentionally ignore her? Nevermind.

I noticed that Zachary didn't want to try many of the stations because it wasn't readily apparent exactly what you were supposed to be doing, but when we would read the sign to him and get him started messing around, he often wouldn't want to leave the station to try a new one.

Out of the Mouths of Babes

Nine-year-old Zachary shares his opinions about his visit to the Exploratorium.

In the back of the Exploratorium, there are these humongous circles on different sides of the room. You sit in one of them and say like "hello," and the other person hears you all the way on the other side of the room without yelling! It was sooo cool!

The food was disgusting! And that's all I have to say about the food.

According to the Exploratorium Fact Sheet for 2009-2010, 52% of all visitors to their facility are adults, with the remaining 48% being children. This being the case, our family felt that if the signs each contained an audio recording of the instructions it might make the exhibits a little more user friendly for the children. 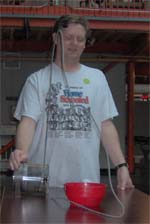 The guys had a terrific time with this rope, powered by a motor that appeared to have a life of its own.

Many of the exhibits contained lengthy explanations that frustrated younger children and audio recordings would have made them more enjoyable and less intimidating, in my opinion.

Our family used to frequent COSI in Columbus, OH and a newer facility built in Toledo, OH, years ago and found them to be more interactive and kid friendly. While the Exploratorium staff has really done a terrific job of creating some neat educational displays they are geared more toward middle to high school students, rather than the younger set, which could greatly benefit from the experience.

To be fair, they offer a play area for really young children but my son was too old for that. While he was old enough to benefit from the many things offered at the Exploratorium, it was difficult to get him interested in an exhibit that required any explanation of what was being presented.

We were dismayed at the number of exhibits, which were closed. Since the admission price wasn't discounted at all, it would have been nice to have been informed on their website that many of the displays were closed for remodeling. We specifically chose to visit before school outings begin on Oct. 3rd. I never dreamed that they wouldn't be fully functioning at this time of year.

They offered three regularly scheduled presentations upstairs. The first one was dissecting a cow's eye, the second was about DNA and the third one escapes my memory. The presentations begin on the hour and are supposed to continue throughout the day until 3:00 p.m.

I stopped by at 3 p.m. because I was interested in the DNA presentation. What I found were people sitting around waiting for it to begin. I pulled up a seat and waited about ten minutes, when no one showed up, I left. Many who were waiting were visibly upset by the no show.

Parents would be well advised to pack lunches for their trip or plan to eat elsewhere; we found the food from the Exploratorium Café to be less than palatable. My son ordered their PB & J Sandwich, the bread was dried out and the crust was hard. My husband, Shawn ordered their chicken sandwich, the bun was old and the sandwich was pretty tasteless. I had cottage cheese at $2.99, which was good, the hot dog was tasty but the bottom portion of the bun was inedible, so I tossed it. Cost with drinks, just under $25.00, not my idea of a good lunch. 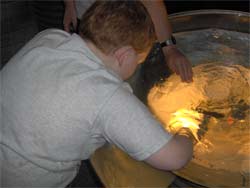 I loved visiting the Exploratorium Store. They had many items on display for people to examine and explore. The store was well laid out, with colorful exhibits, not overly crowded and it was kid friendly. Parents who are on a budget will want to have a good idea what things cost before they buy. While the price on most items seemed fair, some things were available cheaper on their website and other items were available much cheaper else where.

We picked up a Physics kit, a bottle of Iron Filings, a T-Shirt with the Periodic Table of Elements on it and a Spy Kit. You don't want to know what we spent. I will mention that they are serious about closing time. At 5 p.m. sharp, you better be done because they are closing and they don't care if you are still shopping.

Overall the experience was an enjoyable one and we felt it was a good value, despite our few disappointments.

If you can't make the trip to San Francisco, you can still enjoy their online exhibit and many other facinating links.

When you visit, plan to wear your walking shoes. Arrive early, so you can take time to catch lunch in the area and make it back in time to take in the entire place. It really is huge. We arrived around noon and stayed until 5 pm. We did not have time to see and do everything there but we had a full day and are very glad we made the trip.

Potential visitors on a budget can gain free admission to the Exploratorium the first Wednesday of each month.