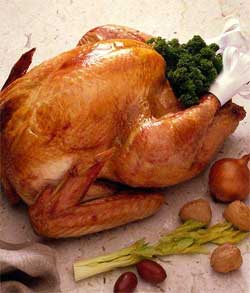 I have posted this narrative of the Thanksgiving story here in the young adult section, so that you, the parent, may decide what is appropriate for your younger children. So, please view this video before allowing young children to watch. I would rate it 12 and over but each child is different. You be the judge.

If you find it difficult to entice that special young person in your life to get involved with family projects. Don't feel alone. Many parents have to put forth great effort to encourage their teenager to try something new. So, if you find it difficult at first to engage your teen in the Thanksgiving spirit, don't despair. Here are some ideas that you may find helpful in jump-starting the holiday spirit inside:

The table was loaded with native fruits like plums, melons, grapes, and cranberries, plus local vegetables such as leeks, wild onions, beans, Jerusalem artichokes, and squash.

Many stories have been orally passed down to us from friends, family members, and local historians. A good storyteller knows that visuals can be very helpful in connecting with the listener. Whether you are simply telling a Thanksgiving story or putting on a play or skit, a good costume can illustrate the event to make a lasting memory. Below you will find links and details about the clothing worn in the 1620's. 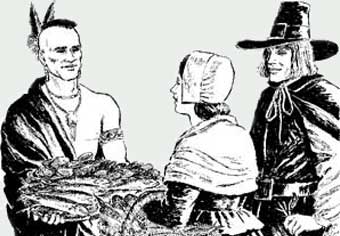 "All real historians need to be detectives. Like a good mystery, new pieces sometime pop up that give you a fresh angle on an old story. I feel very passionate about the history of Thanksgiving because the real story is so much more interesting than the popular myth."
~ Kathleen Curtin at Plimoth Plantation in Massachusetts

The tradition of the Pilgrims' first Thanksgiving is steeped in myth and legend. Few people realize that the Pilgrims did not celebrate Thanksgiving the next year, or any year thereafter, though some of their descendants later made a "Forefather's Day" that usually occurred on December 21 or 22.

Several Presidents, including George Washington, made one-time Thanksgiving holidays. In 1827, Mrs. Sarah Josepha Hale began lobbying several Presidents for the instatement of Thanksgiving as a national holiday, but her lobbying was unsuccessful until 1863 when Abraham Lincoln finally made it a national holiday. Today, our Thanksgiving is the fourth Thursday of November. This was set by President Franklin D. Roosevelt in 1939 (approved by Congress in 1941). [Learn More]

In issue number 3 of Home Educating Family Magazine is located an article entitled, "Remembering John Winthrop 1588-1649," a man who lived during the colonial period. Without his leadership, the colony might never have come into existence. With another governor they might have all perished or been reduced to anarchy or civil war.

"History is a set of lies agreed upon."
~Napoleon Bonaparte

The descendants of American Indians who had the first Thanksgiving with the Pilgrims have not disappeared, nor have they forgotten that fateful meal. In fact, many live in the Cape Cod town of Mashpee -- known by most for its beaches and quaint New England charm.